Things I recently learned at the International Network of Golf gathering

I recently spent a couple days at the International Network of Golf annual conference in Atlantic City NJ  and  here are some of the new products and services I discovered while I was there.

Alphard Golf
This is an all in one pushcart and golf bag— these units are all one piece and fits easily in your car trunk.  It features four large easily detachable wheels with a strong enough club cover that it can also serve as your travel bag  (no outside travel bag needed)  and it takes just seconds to set up.  It’s also easily converts to a cart bag.
www.AlphardGolf.com

EyeLoc Golf Gear—  These are Sunglasses that are a training aid to keep your eyes locked on the ball and your head still.  It has  a vertical line in each lens  (which you adjust to your own eyes) and you simply adjust it till you see only one line.  Keep your ball within that line and the slightest eye or head movement off the ball is detected
www.eyeloc.com

StgrackalLine  uses laser technology to map the slope and breaks of golf course putting greens. They have been doing it for years for the PGA tour yardage books and now have an ap called “own the app own the green”   If your course subscribes to their  service you can download these maps to your mobile device and get complete information on the slope and break of greens  The ap is $20 per year
www.strackaline.com

Knuth Golf  Dean Knuth had developed a new driver called High Heat. It is USGA conforming and is longer and far more forgiving than the major brand drivers.  Its unique feature is its greatly increased sweet spot.   Its in beta testing and should be avail in Sept 2014.   I hit several shots of the prototype on the range and  I want one when they come out.
www.knuthgolf.com

Snag Golf  developed  appropriate golf equipment  to be experienced on non- traditional  venues.  Over 12,000 schools are worldwide are using Snag Golf to introduce children to the game of golf.   We played it on the beach and its quite fun
www.snaggolf.com

Nexbelt   Is your belt holes sometime just a bit too tight or too loose because of the proximity of the buckle holes?   Nexbelt has no holes and has developed a racheting system  that lets you adjust it to the next 1/4 inch.  They have many snappy designs and for both golf and causal wear.
www.nexbelt.com

Golf Mesquite  and the Amputee Long Drive Championship   Golf Mesquite has hosted the Remax long drive contest for several years now and this October15-17, 2014 they will host the Amputee Long Drive Championship.  These are people who are not fully able body.   We saw three of them do a demonstration on the driving range.  A one armed  man was hitting his drive 260 plus yards and two men  who each had  one good leg and one prothesis  were hitting drives in excess of 375 yards—- wow    http://www.amputeelongdrivechampionship.com

I also learned that years ago, at a match at Atlantic City Golf Club  the terms "Birdie" and "Eagle"  were first coined.
Posted by A Golfers Dream at 7:44 AM No comments:

by Larry Berle
Discover Life at 15 miles an hour. Just how do you do that?  Probably not by running faster..  First, find a community with  90 miles of cart paths and that, my friends,  is Peachtree City,  a planed community just southwest of Atlanta GA.  This place can be as much fun as a barrel of sunshine, even if its raining. There is more than enough to do here, three golf courses, tennis, swimming, schools, industry, churches, hospitals- a full service city within the Greater Atlanta Area, and a very large presence in the film and Television industry.   Some here refer to it as  Southern Hollywood and others refer to it as “The Bubble.”

It may, at first, seem like a retirement community but, in fact,  substantially less than 1/2 of its residents are retired.  Joel Cowan the founder of Peachtree City, told us   “We didn't want second home buyers, our target market from the beginning was a diverse cross section of pioneers  to join this community”   It is simply a small town in an almost  rural setting in close proximity to the thriving metropolis of Atlanta.  38,000 people live here. But here is the part that I found intriguing, there are approx  8,000 households and 10,000 golf carts. (thats 1.2 carts per family) In fact we drove by the high school on Friday afternoon and the parking lot is full of golf  carts. That is how the High School kids of Peachtree City get to and from school. 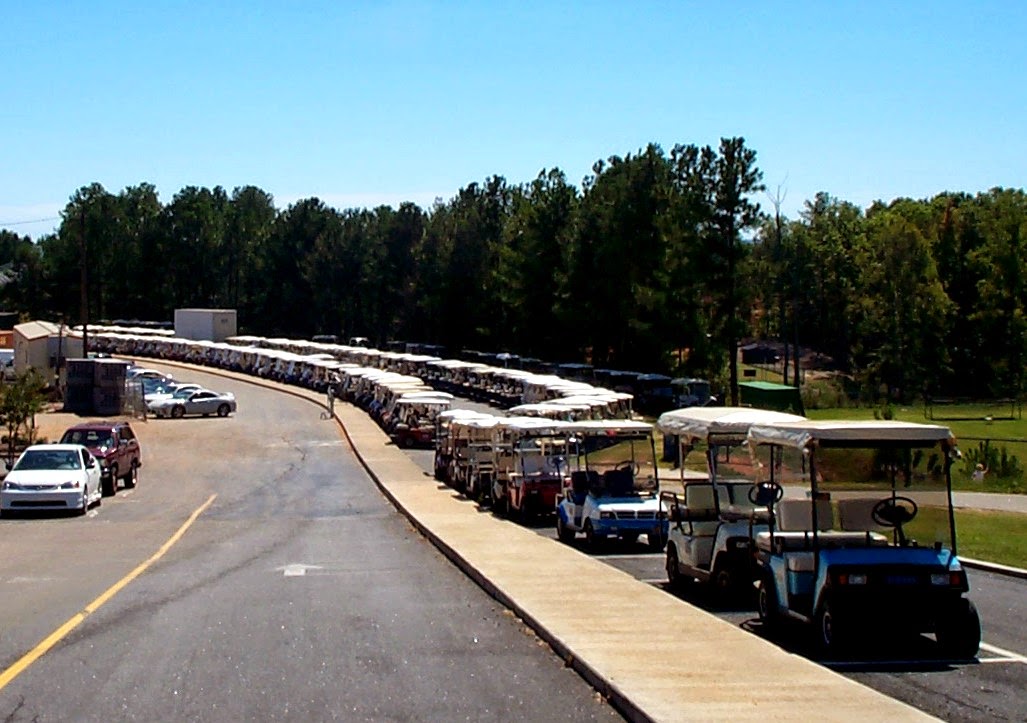 The parking lot at Peachtree High

I asked Nicole Sheets of the Peachtree Convention and Vistors Assn if she thought that kids who learned to drive golf carts before cars became safer drivers. She said “there are not studies that would indicate that teens who start driving on Golf Carts are better drivers, but my opinion would be yes!”


Hotels
We stayed in 2 different hotels on this trip and I recommend them both highly
Dolce Atlanta Peachtree City has  233 rooms  on a very tranquil 40 acre wooded site.  Complete with fitness center,  swimming pool bicycles and great food
http://www.dolce.com/Atlanta-Peachtree/

Wyndham  Peachtree is located on 19 acres of lush forest  with a 10,000 Sq foot fitness center, and 250 guest rooms.  They have more great food—  the restaurants in these two hotels are good enough that there may be no need to wander out- but you probably don't want to miss some of the special  area restaurants.
www.wyndhampcc.com

If you love sumptuous food, you’ve come to the right place, including the chefs of these hotels, who are wonderful culinary artists, themselves.  We had dinner the first night at  Georgia Shrimp Co  where every writer on this trip spoke lovingly about the food  (my pork chop was very tasty)  and a wonderful jazz singer named Toni Byrd entertains regularly  www.Tonibyrd.net

The following day we had an outstanding lunch at Zac Brown’s Southern Ground & Social Club in Senioa just a few miles down the road from Peachtree City.  We were served a  delicious tasting menu by Chef Josh Butler who was Zach Browns  chef on tour for a several years,  and was the chef of the Florida Governors mansion for a couple years and  has also cooked in the White House more than once.

Just a few outstanding dishes were the Barbacoa brisket, the OMG Burger,  (the name says it all) their own style of Mac n’ Queso.  This is a restaurant that could easily become popular in large metropolitan area and this small town is lucky enough to have it all to itself.
http://www.southerngroundsocialclub.com

Southern Hollywood Film Tour
The television and film industry has a growing presence here in Peachtree City and the surrounding area.    This has been the location for many films and TV shows including Sweet Home Alabama, Driving Miss Daisy, Fried Green Tomatoes and many more.  In addition this is where  the TV shows,  Walking Dead  (which has the largest viewership of any cable TV show) and Drop Dead Diva have been producing  for several seasons.  There is more studio space under construction as this industry grows here and if you are a fan of any of these, you will love this tour.
http://visitpeachtreecity.com/what-to-do/attractions/all/duplicate-of-venue
678-216-0282

What can my dad do?

There is plenty of golf here..  The people at Cannongate own and operate 22 golf clubs in the Atlanta area.   Six of them are within a 15 mile  drive  of Peachtree City and three of them are right here in town, Planterra Ridge, Flat Creek Club and Braelinn.
Join one and you have joined them all and at bargain prices too.  A full golf membership is $400 initiation fee and monthly dues of $239.  If you are staying at the hotels of Peachtree City these courses will treat you as if you were a member and it will cost $45-55  for a round.
770-274-0704
www.canongategolf.com

The Fred Brown Amphitheater
Tonight we saw Gladys Knight at “The Fred” and this woman, at the age of 69, can still belt  out  “Midnight Train to Georgia.  She even had one Pip with here.
This is a beautiful 2500 seat outdoor amphitheater  here in Peachtree City and  a great place to see a show.  Visit    www.amphitheater.org  to see what shows they have coming this season.

Golf Carts are King
We went on a photo scavenger hunt on golf carts.  Four person teams spread out over the miles of golf cart trails following clues to return with photos that had to include all four team member.  We stopped many Peachtree City residents for directions,  or to take our photo  or  with questions like “do you have a tattoo? we need a photo of a tattoo”   Everyone here was so helpful and friendly —  You feel very welcome here.  (I think they had met people before on these scavenger hunts)

Is there more?
If you want to venture out of the bubble  then head for Atlanta and tour the CNN Headquarters, President Jimmy Carter Library, The Martin Luther King Center and even Coca Cola.

For several years CNN/Money Magazine has ranked Peachtree City in its Top 100 best places to live in the US.
Other awards have included:
“Georgia's Best Place to Raise Kids 2013” - BusinessWeek,
“Top 10 Cities for Families” - Family Circle Magazine, 2011
“Georgia's Best Affordable Suburb” - BusinessWeek, 2009
“10 Great Places for Boomers” - Newsmax Magazine, 2009
Its a terrific place to visit and would surely be a wonderful place to live, all within in 25 miles of the busiest airport in the U.S.
One final note    I know its called Peachtree City but we were told there isn’t a Peachtree anywhere in the city.  Go Figure!!

Posted by A Golfers Dream at 5:51 AM No comments:

A Golfers Dream
I owned a company called SRO Productions for 31 years. We were in the concert promotion and cd compilation business. I sold it in 2003 and in 2007 I published a new book about playing the top 100 golf courses in America called A Golfers Dream: How a regular guy conquered the Golf Digest list of Americas Top 100 Courses. You can find my book at www.GolfersDreamBook.com or www.amazon.com like my book fan page https://www.facebook.com/pages/Book-A-Golfers-Dream